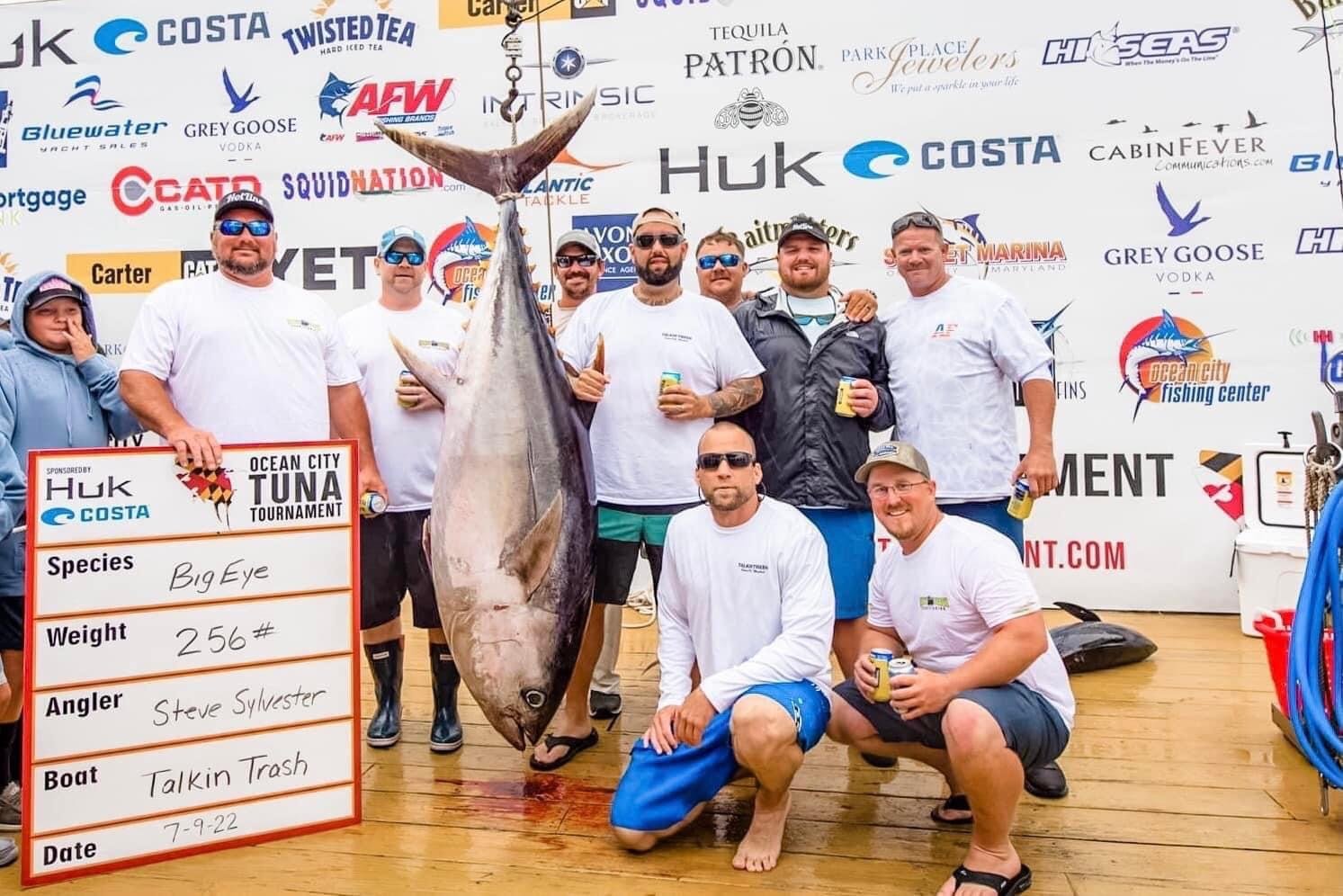 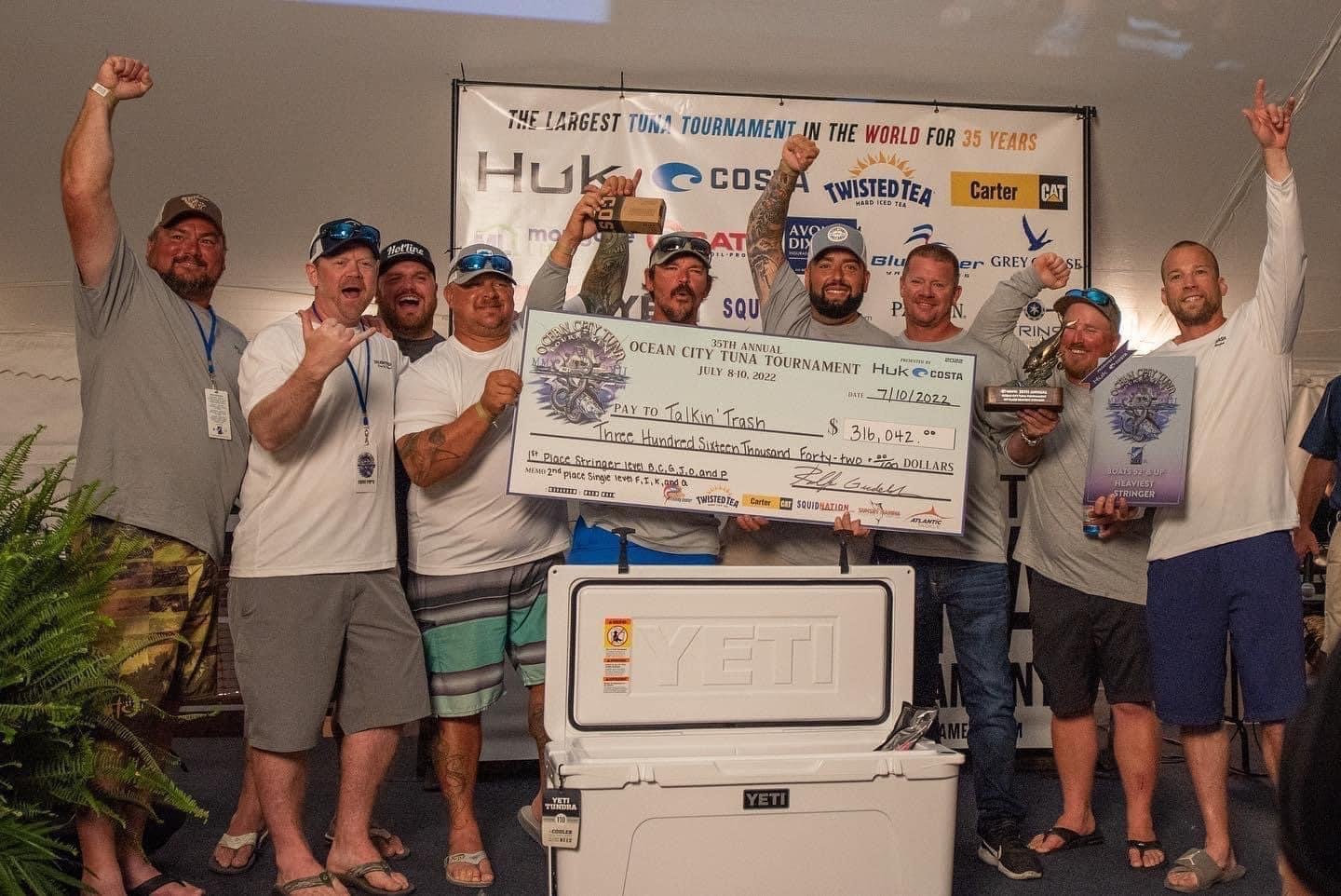 Chris Little (third from right) captained the Talkin’ Trash crew that placed first in the Heaviest Stringer category and second place in the Single Largest category. 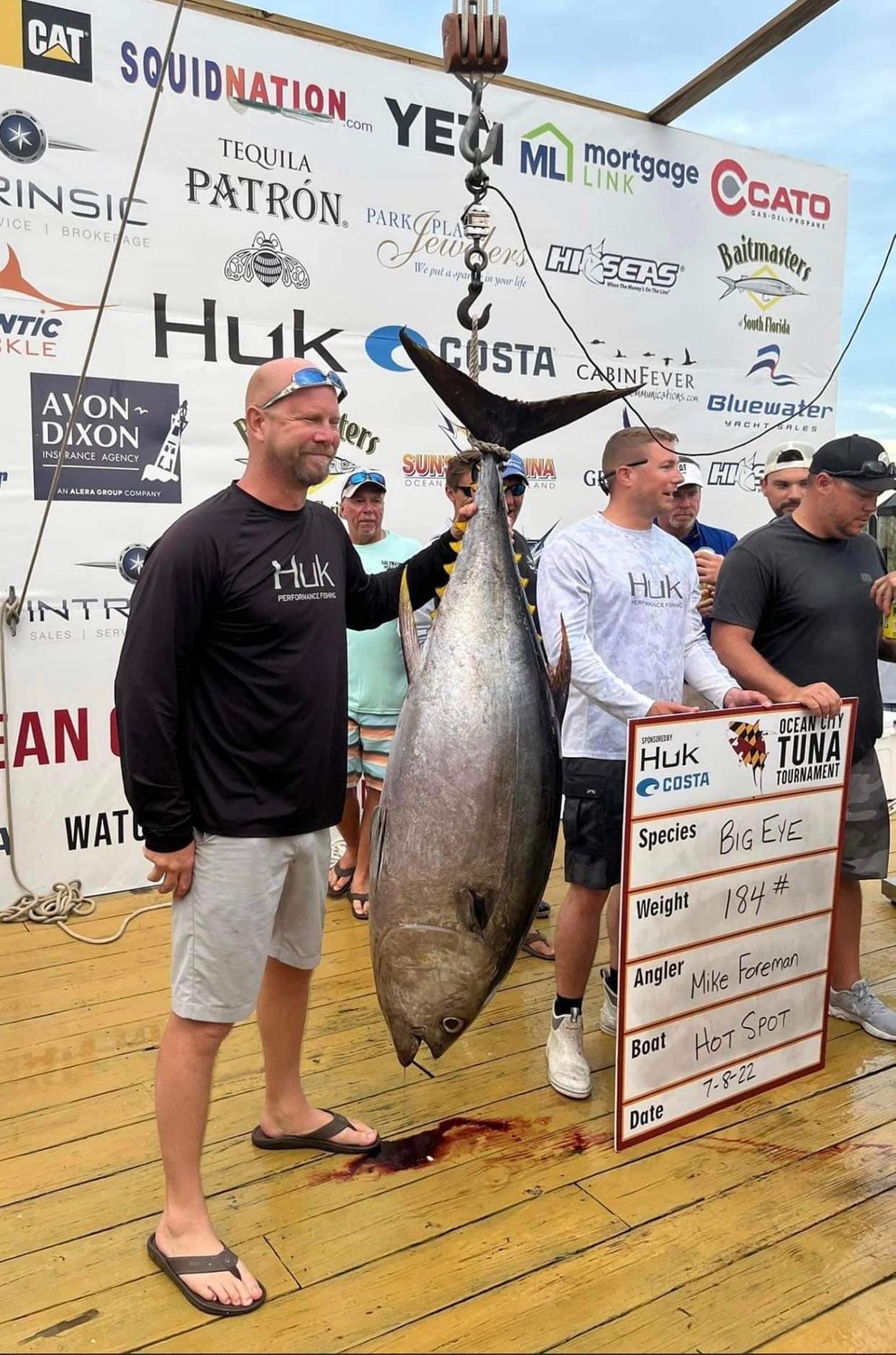 Hitting the beach, relaxing in a sand chair and listening to waves gently crash is a popular summer activity in our area, but for a special group of big fish anglers, their preferred view is from on the water, on the waves, often many miles away from the shore.

From July 8 to July 10, hundreds of fishermen and 109 boats launched from Ocean City to the deep waters of the Atlantic to participate in the 35th annual Ocean City Tuna Tournament, hoping to cash in on a portion of the $1.1 million total purse. The weather was great both days, overcast with light to moderate winds.

Hot Spot, an Ocean City based boat that includes anglers from Severna Park and Pasadena, was among the fleet. The crew consisted of captain Kenny Antkowiak, and his team of Ole School Anglers: first mate Vinnie Legambi, Mike Foreman, Sasha Serpa, Mike Runkles, Rich McCollough, Paul Suplee and Chris Snell. Foreman, a Severna Park resident, has been fishing since he was a boy and joined the Ole School Anglers six years ago.

“Fishing is pretty intense with days of preparation, including lining up rods to prepping ballyhoo (bait),” Foreman said. “The day starts around 3:30am as anglers arrive. It’s about a three-hour run to [fishing locations].”

Once at the location the captain has chosen on his radar and Garmin, the team must wait until 7:00am to drop lines. Hot Spot will fish with seven to 11 rods at once, trolling plastic plugs and other various lures topped with ballyhoo natural bait. The lures must be placed precisely as they cannot tangle when turning the boat.

There are strict guidelines on how far north and south a boat can fish, and the times are precise, as well. Lines go in at 7:00am and come out at 3:00pm, with no exceptions.

Once a fish or multiple fish “hit,” the fight is on and it’s up to the first mate and the anglers to clear lines to allow the fight to continue. Some battles can last for hours depending on the size of the fish. When one angler is trying to bring in a fish, it’s important for the anglers not fishing to assist the ones fighting the fish.

“On day one, we were the second to last boat to weigh-in a big eye tuna, and ours was first until the last boat weighed in,” Foreman said. “So for an hour, we were the No. 1 boat with the possibility of a $400,000-plus check.”

Hot Spot ultimately finished in 10th place and cashed a check for just over $12,000 to divide between the anglers, mates and captain.

Foreman’s fish weighed 184 pounds and took him 75 minutes to reel in.

“Our team is very social and friendly toward each other, but when a fish is on, it’s very serious and stressful at times,” he said.

Imagine trying to pull a fish weighing as much as a man using only a fishing line and rod, while the fish is actively and forcefully swimming in the opposite direction. The strength required of anglers and their equipment is immense. Any lapse in an angler’s form or an equipment break will result in the loss of the fish.

“Tournaments are exciting because you never know if you are going to be the one hooking the biggest fish and win the purse, which can be as high as millions of dollars,” Foreman added.

Talkin’ Trash, a boat captained by Chris Little of Pasadena, placed first in the Heaviest Stringer category (535 pounds, two-day total) and second place in the Single Largest category (256 pounds) and received a check for $316,042.

Little, the Talkin’ Trash boat owner, runs a fishing charter business out of Ocean City and said the popularity of the sport keeps his schedule booked from June 1 through September 30. When he’s not chartering, he’s in a tournament. He will use the payout for boat maintenance.

“We struggled on day one but did much better on day two when we caught four,” Little said. “You just have to hope you read the water charts and radar properly and find a good place to drop your lines.”

Hot Spot will fish two to three tournaments a year, which include the Tuna Tournament, the White Marlin Open, and often one other.

“We usually buy in at $15,000 to $25,000 per tournament, which will get us into several different classes, including Largest Tuna, Largest Stringer, Largest Bill Fish, small boat or large boat classes,” Foreman said.

“This was the first time me and a couple other anglers have been to the scales and had the opportunity to hold first place for a time out of over 100 boats,” Foreman said. “It was a thrill of a lifetime, and we will never forget it.”