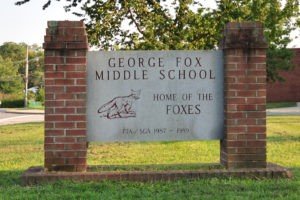 Acting on a recommendation from a diverse committee of community members, parents, historians and school system officials on March 17, the Board of Education unanimously voted to rename Pasadena’s George Fox Middle School, a building that has borne the name of Anne Arundel County Public Schools’ first superintendent since it opened in 1949.

The vote came shortly after members of George Fox Middle School Historical Renaming Evaluation Committee delivered their report to the board, which voted last July to form the panel following a discussion of comments attributed to Fox during a court case regarding equal pay for Black teachers, something Fox opposed. Fox served as the superintendent from 1916 to 1946.

“To have students sit in a building named for a man who championed Jim Crow and segregationist policies and structures does not align with the AACPS core value of All Means All,” Jamie Hurman-Cougnet, a committee member and vice president of the George Fox Middle School PTSA, told the board during committee’s presentation of the report.

An executive summary of the committee’s report can be found here.

The board’s vote sets in motion a separate renaming process spelled out under board policy EG and Administrative Regulation EG-RA, “Naming School Facilities.” That process includes solicitation of suggestions for a new name and a meeting to select a name to recommend to the Board of Education, which must ultimately approve a new name for the school.