Dobbins Island: A Jewel Of The Magothy 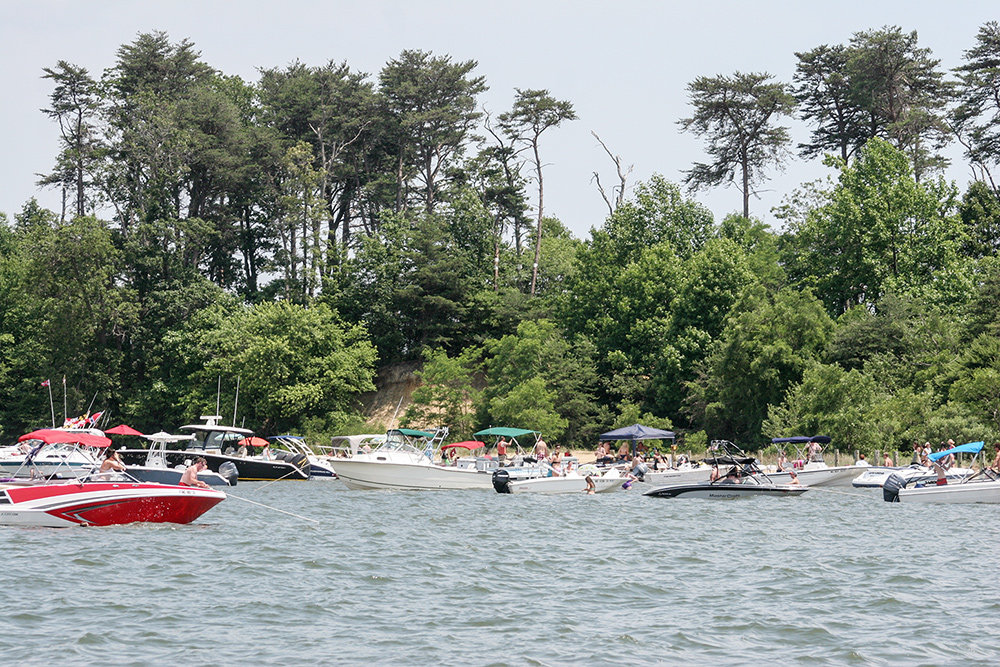 Although Dobbins Island is privately owned, boaters and swimmers are allowed to recreate around and up to the mean high tide line.
File Photo
Posted Wednesday, July 17, 2019 2:14 pm
By Dylan Roche

Jenny Vedrani of Pasadena remembers how her kids learned to swim and paddleboard off the shores of Dobbins Island in the Magothy River. “We try to go once a week,” she said. “Our youngest was afraid to be in water above his head and it took lots of coaxing to get him in the water. Things change fast.” Now Vedrani’s son can jump straight off the boat into the water – and he has a blast while doing it.

Their family’s story is one of many memories you might hear from people living in the Magothy watershed not only in recent times but also as far back as a few hundred years.

Dobbins Island – which has also been known as Big Island, Raspberry Island and Dutch Ship Island throughout the years since the Chesapeake region was settled – has long been what local historian Marianne Taylor described as a “focal point for rendezvous” and “a center of social life” on the Magothy River. In her book “My River Speaks: The History and Lore of the Magothy River,” the former English professor touches on how Dobbins Island was once used as a hunting camp by Algonquin and Piscataway tribes, and would have been passed by Dutch, Spanish and English trading ships. Its early nickname Dutch Ship Island comes from stories of a shipwreck nearby in the river.

The island has been privately owned since 1769, when its first owner was William Gambrel, for whom the town of Gambrills was named. The property later passed to Annapolis attorney John Gibson, who owned Gibson Island, and was bought and sold several more times before George Dobbin bought it in the late 1800s. The Dobbins name stuck with the island ever since.

For many years during the 19th century, Dobbins Island was the scene of debutante balls and summer parties attended by guests who would ride to the island on horse and buggy across a sandbar at low tide. It was the beginning of many years of socializing centered on the island.

Taylor has memories of her own children taking their sailboat out to the island to explore, as did their friends and neighbors. “People went crabbing and swimming, and the Girl Scouts would come over from Camp Whippoorwill,” she detailed.

Memories like Vedrani’s and Taylor’s are part of the reason the Magothy River Association pushed to keep the island available to boaters and swimmers. “If you’re a boater and you have a bunch of young children, you’re not going to put them off the back of your boat in 20 feet of water,” said Paul Spadaro, the association’s president. “Dobbins Island’s beach, historically, for generations, has been that beach.”

Because the island is privately owned, modern adventurers on the Magothy should be respectful to not trespass. The current owner, David Clickner, who bought the island in 2002, allows people to go up to the mean high tide line, but he cannot allow them to go any farther onto the island because of the liability. He also requests that anyone using the beach around the island clean up after themselves.

“Our biggest problem is the trash and stuff like that,” Clickner said. “It is being used kind of as a public park, and yet we don’t have the situation of being public enough that the government takes care of that for us.” Otherwise, Clickner said, there have not been any problems.

As it has for generations, Dobbins Island continues to be a summer landmark and a place for making memories. “It was a jewel of the Magothy – and it still is,” Taylor said. “It’s still a beautiful island that we love.”

Meaningful Ways To Give Back This Holiday Season