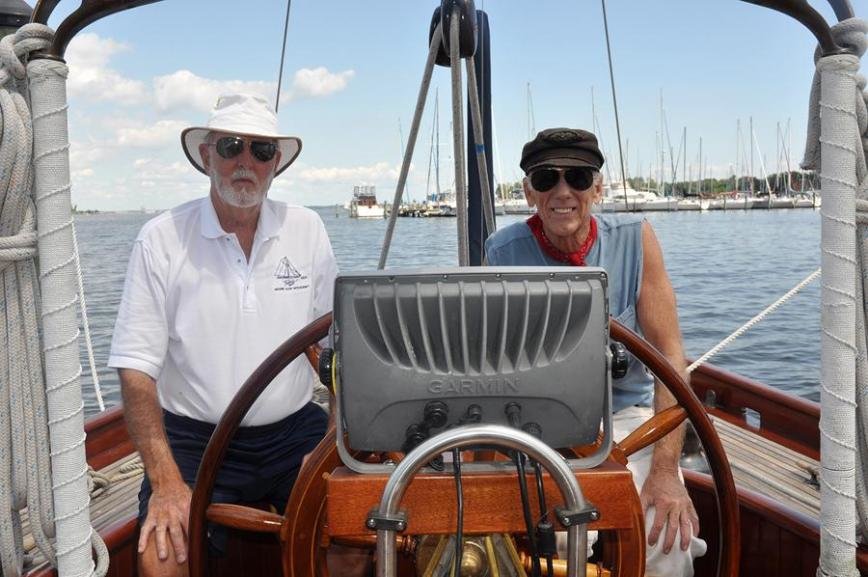 Owner David Butler (left) and Captain Paul Itzel have pieced together the remarkable history of the 112-year-old yacht known as the Witchcraft.
Photos by Zach Sparks 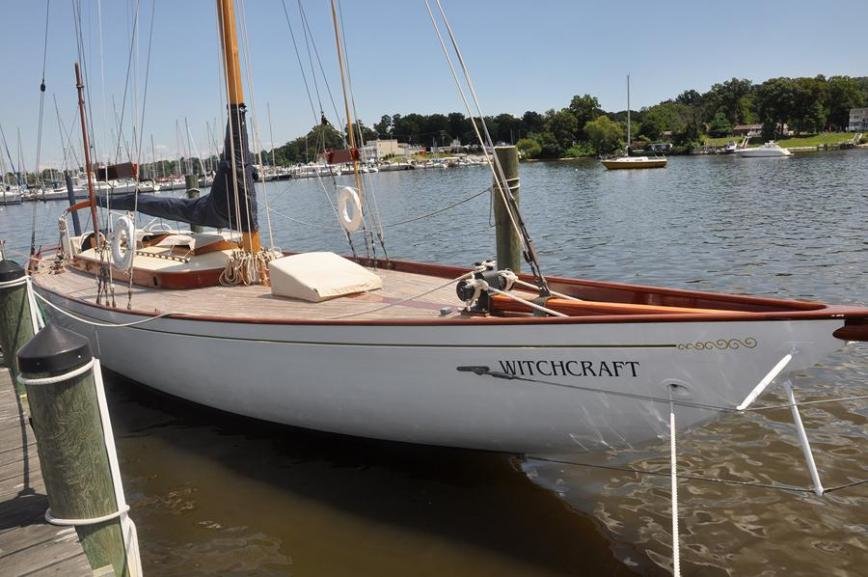 The Witchcraft underwent a major restoration in the ‘70s, but it still features many of its original components. 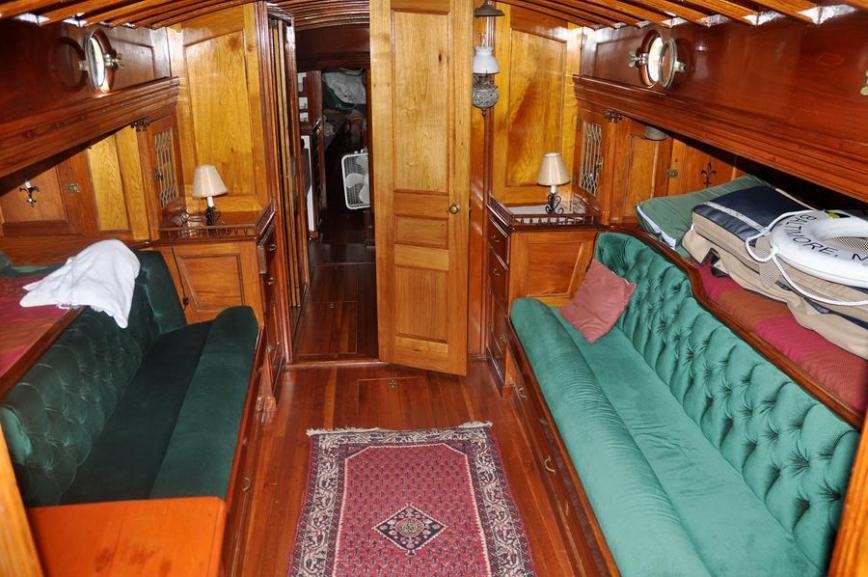 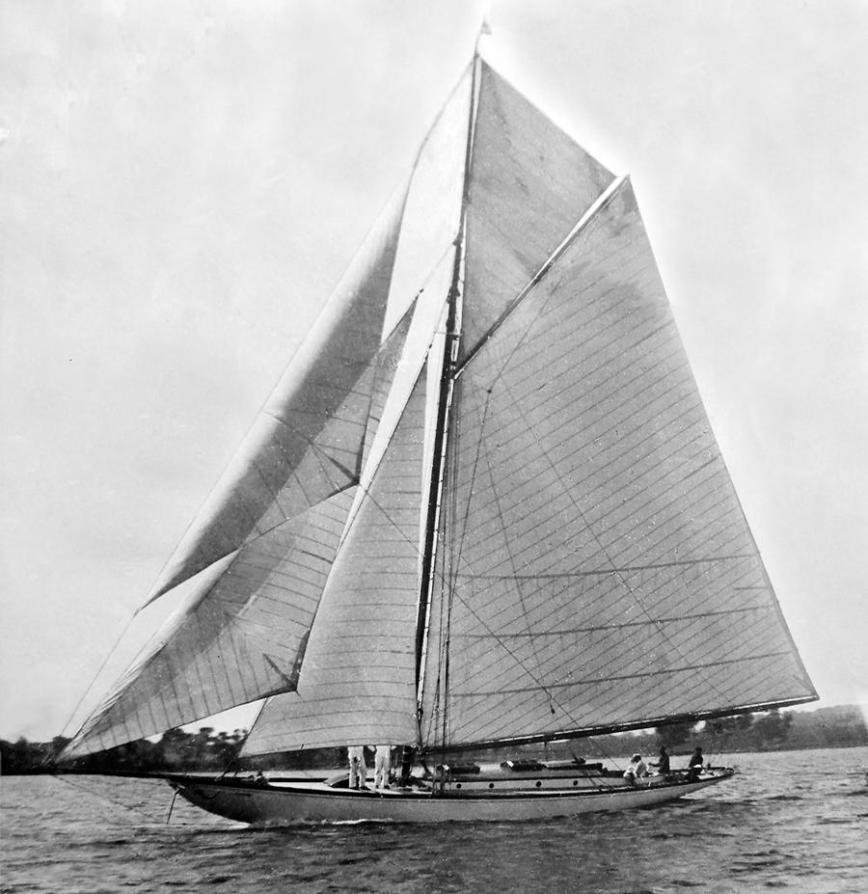 The Witchcraft was built in 1903 in Boston as a sailing yacht for William Rogers.
Photo Provided
Previous Next
Posted Wednesday, August 26, 2015 9:35 pm
Zach Sparks
The Witchcraft, a 66-foot Pasadena yacht docked in Tar Cove, about half a mile southwest of Maryland Yacht Club, has had more life experiences than some humans. At 112 years old, it was a witness to the Great Depression and World War II, and in the ‘70s, it underwent a massive restoration. So when fellow boaters pass current Witchcraft owner David Butler Jr. and Captain Paul Itzel while navigating the waters of the Patapsco River and Chesapeake Bay, they are in awe of the yacht’s history.

Long before it was purchased by Butler, the Witchcraft was a sailing yacht designed by naval architect B.B. Crowninshield and built at Lawley Boat Yard in Boston for its first owner, William Rogers, in 1903.

“The history is blueblood, New England sailing,” said Butler, who has owned the Witchcraft since 2008, when he purchased the vessel from Paul Itzel.

In 1920, it was sold to B. Karl Sharp, and one year later, it was acquired by Franklin Sullivan, who, in his 22 years of ownership, brought the Witchcraft to New York and changed its rig (the configuration of its mast and sails) from a four-cornered gaff sloop to a Bermudian rig, which features triangular sails and is the most commonly used rig type today.

It was the next owners, Maryland Yacht Club members Ken and Dorothy Saffer, who brought the vessel to Maryland, in spite of dangerous conditions.

“Of course, they had zero navigation stuff, but also … there was a law that everybody on the water, including every hotel, had to turn out all their lights and put blankets over all their windows,” explained Itzel, noting that the seafarers likely had only a compass, binoculars and a flashlight as navigational tools. “The Germans were standing outside looking toward the shore in their submarines in pitch black at night, and even with no radio on, they could see a Liberty ship go by and they’d torpedo them.”

The Saffers made the journey safely, and after changing owners again, Butler’s father, a career naval pilot named David Butler Sr., purchased the Witchcraft in 1957. He maintained the vessel for two years until being relocated from Washington, D.C., to Florida.

Butler Jr. remembers enjoying the yacht with his brother, Bryan William. “We enjoyed sailing until [my father] got transferred and I went off to college. Then he lost his slave labor,” he joked.

Itzel bought the boat in 1970. At the time, Itzel was in his 20s, and he got accustomed to boats after being a self-proclaimed “lowlife helper,” who spent two summers working at Ventnor Marina as a teen.

With his brother, George, Itzel built a shed from the remains of Pasadena houses damaged by Hurricane Agnes, and because they restored other boats during the day to make an income, they were left with nights and weekends to restore the Witchcraft.

In 1972, Itzel took the yacht on shore and kept the parts he could use to rebuild it — the mast, the hardware and the interior. They took the bad wood, mostly the hull, and burned it. “They did basically what a car guy would call a frame-off restoration,” Butler said.

When it was finished, the Witchcraft featured white cedar planking, a mast made from Sitka spruce, a teak deck, butternut interior, mahogany hull trim and white oak framing, and it was fastened in bronze. Because it was built before the invention of the metal mast and fiberglass, the Witchcraft is in a constant state of restoration. “You have to be painting, varnishing or fixing something year-round,” Butler emphasized.

While searching for plans of the Witchcraft so he could build his own replica, Butler came across research that led to Itzel. Butler eventually purchased the yacht, keeping Itzel on board as its captain. Together, they often display the yacht at shows in Annapolis and other waterfront communities. Although it is 112 years old, Butler hopes the Witchcraft will stay in his family for generations to come.

“The Witchcraft is not going to be a commercial vessel,” he said. “I would like to share her with the public. The Witchcraft creates a whole network of new friendships. It’s like a social magnet. She is a unique experience.”