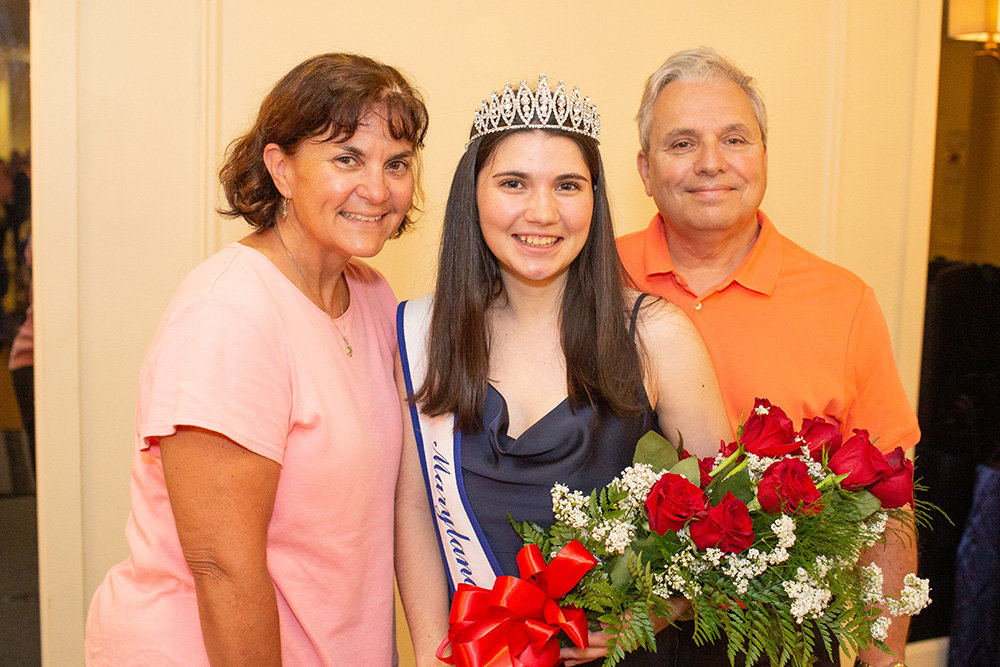 Connie and Sam Karides supported their daughter, Elizabeth, during the pageant for Maryland State Dairy Princess in July.
Photos Provided

Elizabeth Karides was chosen as the 2021 Maryland State Dairy Princess on July 14, and she’s determined to milk the opportunity for all it’s worth.

Her goal is not to promote herself, though. The former Dairy Princess of South Central Maryland, Karides wants to use her public speaking skills to share three messages with the public.

“I want to share with people how nutritional real milk is,” Karides said, stating the first message. “It has 13 essential nutrients. It protects you from developing chronic diseases and improves the immune system.”

She also wants people to know that from her firsthand experience, farmers treat animals fairly and the farmers take their environmental responsibility seriously.

“Dairy farmers are stewards of the environment,” she said. “They are working to reduce their carbon footprint.”

A junior at Severna Park High School, Karides is a longtime member of the Anne Arundel 4-H Dairy Leasing Club, which allows members to feed and care for a heifer from March through October. In her previous role as Dairy Princess of South Central Maryland, she traveled to stores, malls, fairs, schools and festivals around her area, promoting the dairy industry and the healthfulness of milk and dairy products.

Now, her role will take her farther across the state, including to the Maryland State Fair, which kicks off August 26 in Timonium.

“She will be an outstanding representative for the state’s dairy industry, along with the other four regional dairy princesses,” said Susan Summers, a 38-year member of the Maryland Dairy Princess Committee and a former chair.

“The scorecard focused on a personal interview and onstage performance, where personality, poise and dairy knowledge were judged,” Summer said. “And each contestant gave a milk toast and creative promotional skit, where they were judged on delivery and content.”

For the milk toast, Karides had to pretend that she was addressing a Lions Club.

“For my toast, I explained that just like dairy farmers are the stewards of the earth, Lions Club members are stewards of the people, helping them to improve their sight and quality of life,” she said.

Karides will serve a one-year term as Maryland State Dairy Princess. She is also active in extracurricular activities at Severna Park High School. Karides is president of Students Against Destructive Decisions (SADD) and is a member of National Honor Society and the It’s Academic team.

She has not decided what to study after high school, but she may pursue a career connected to the agricultural community.

“I love meeting these farmers and people in the agricultural community,” she said.

Have The Most Wonderful Meal Of The Year