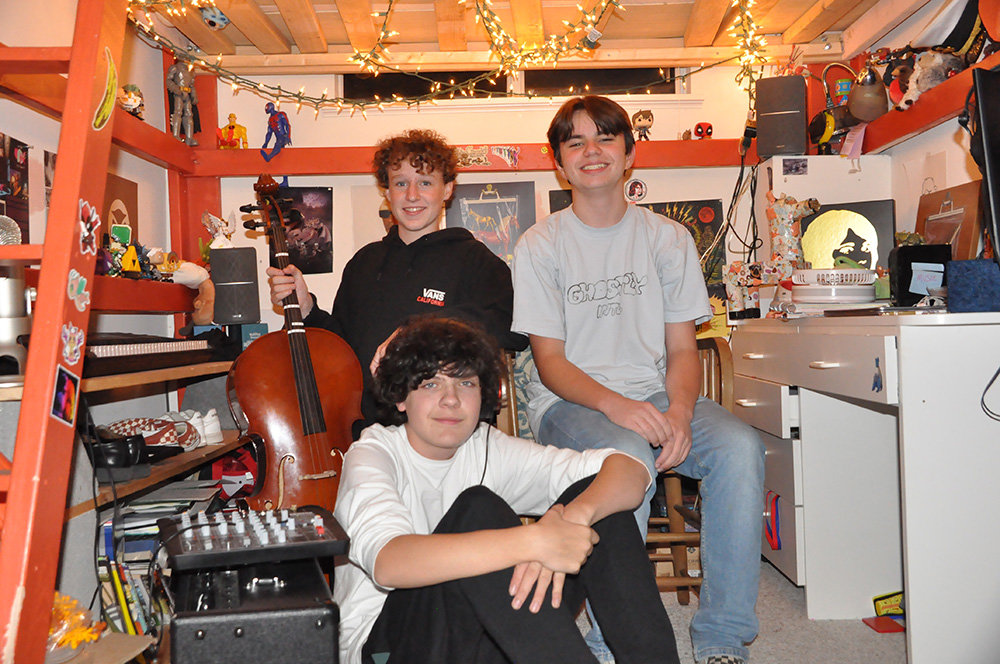 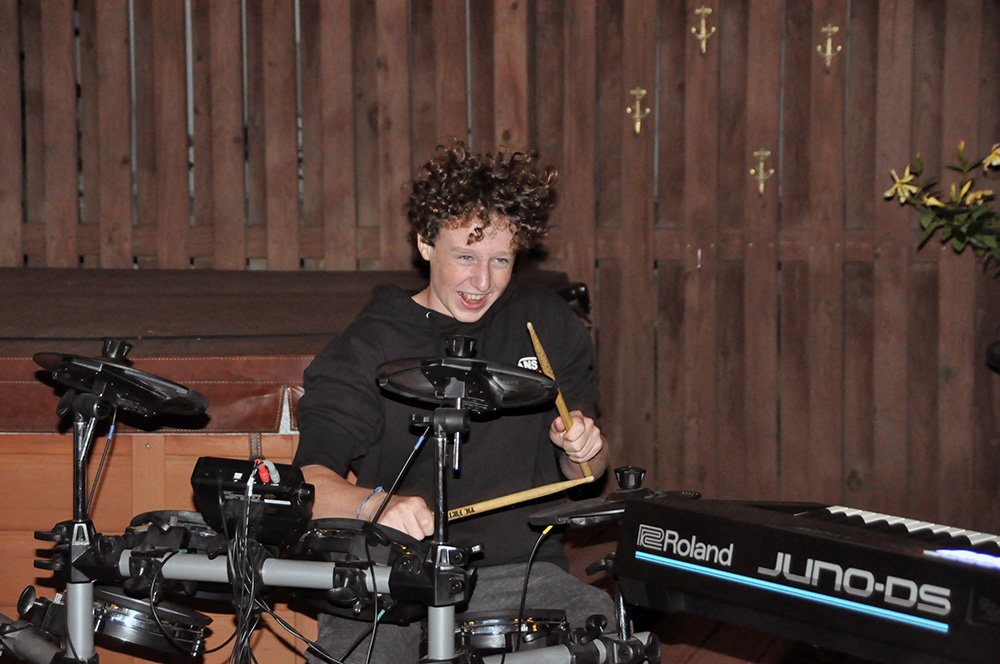 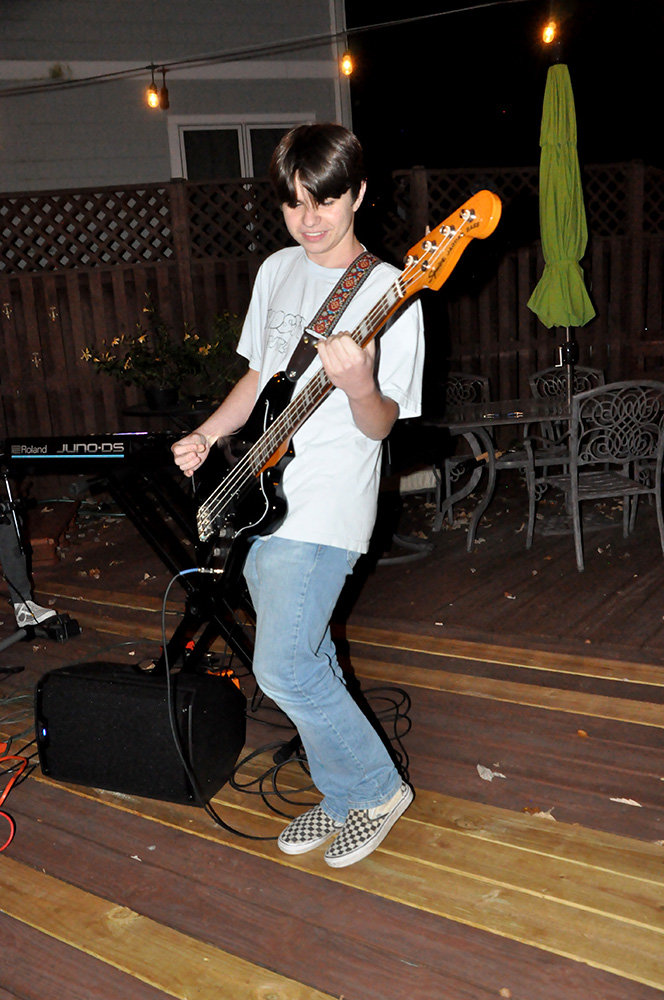 Ivy League’s bassist, Keith Ivey, learned to play the bass guitar about a year ago. Ivey also doubles as the band’s keyboardist.
Photos by Mark Patton 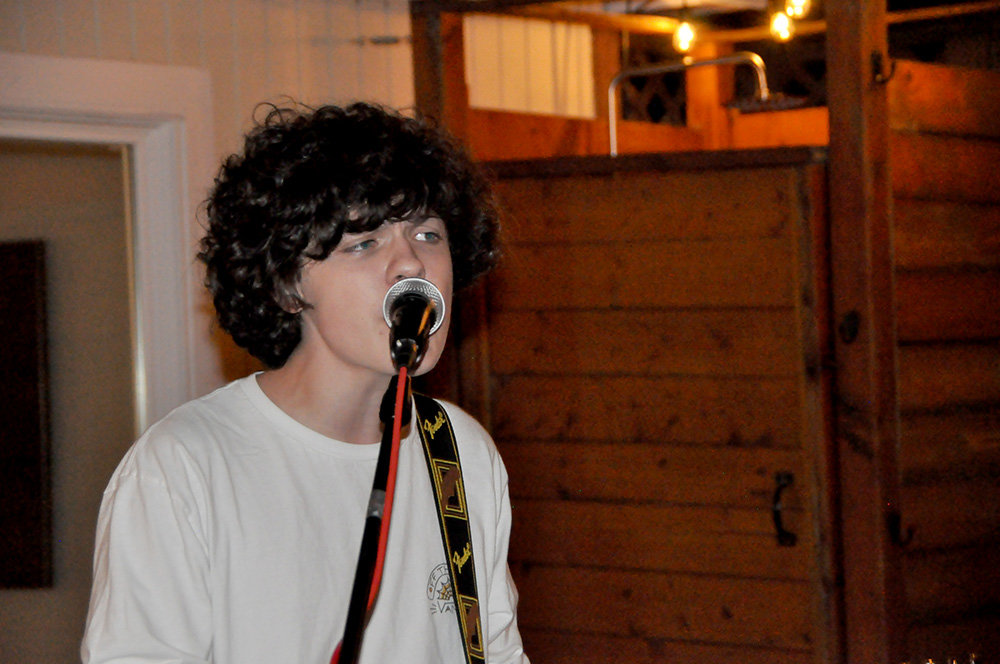 Nick Stohler, Ivy League’s lead singer and guitarist, said the band’s name was thought up before bandmate Keith Ivey joined. “I thought it sounded cool and it fit what I was trying to go for, so it stuck,” Stohler said.
Photos by Mark Patton 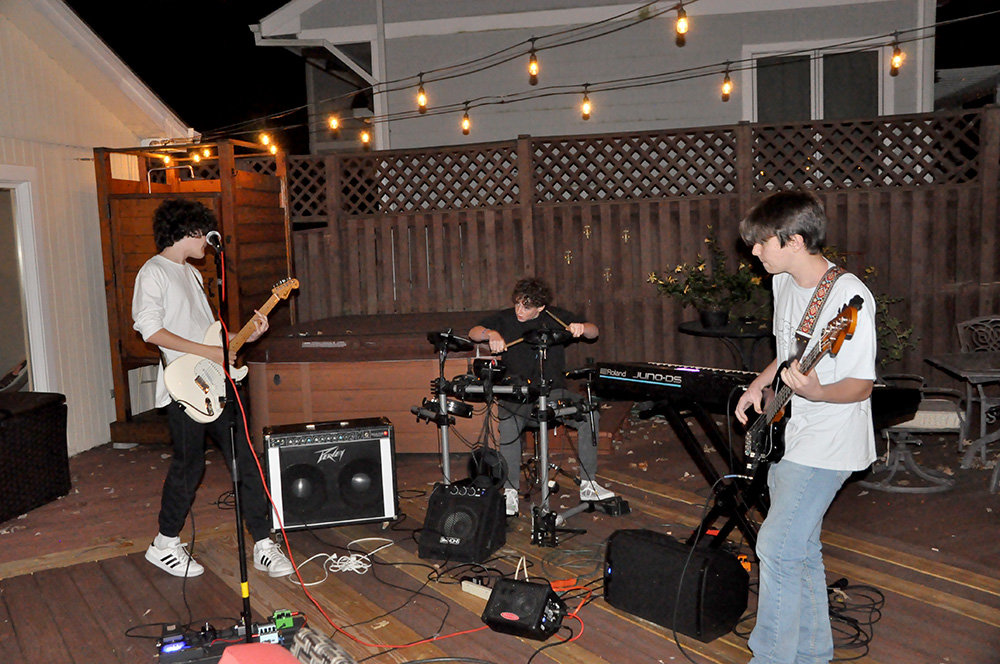 Ivy League performed a two-song set for the Severna Park Voice on October 11. The band belted out original tunes “Sunburn” and “Burning Drawings” from their debut album during their set.
Photos by Mark Patton 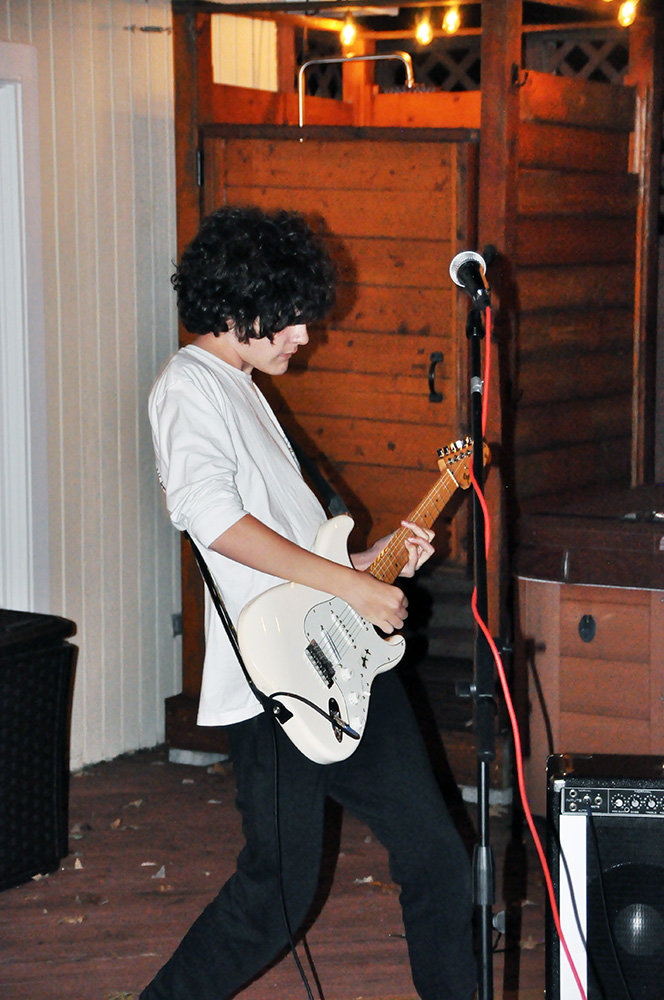 Nick Stohler, Ivy League’s lead singer and guitarist, said his fellow bandmates are his best friends. “I think the reason we work so well together is because we actually are friends,” Stohler said.
Photos by Mark Patton 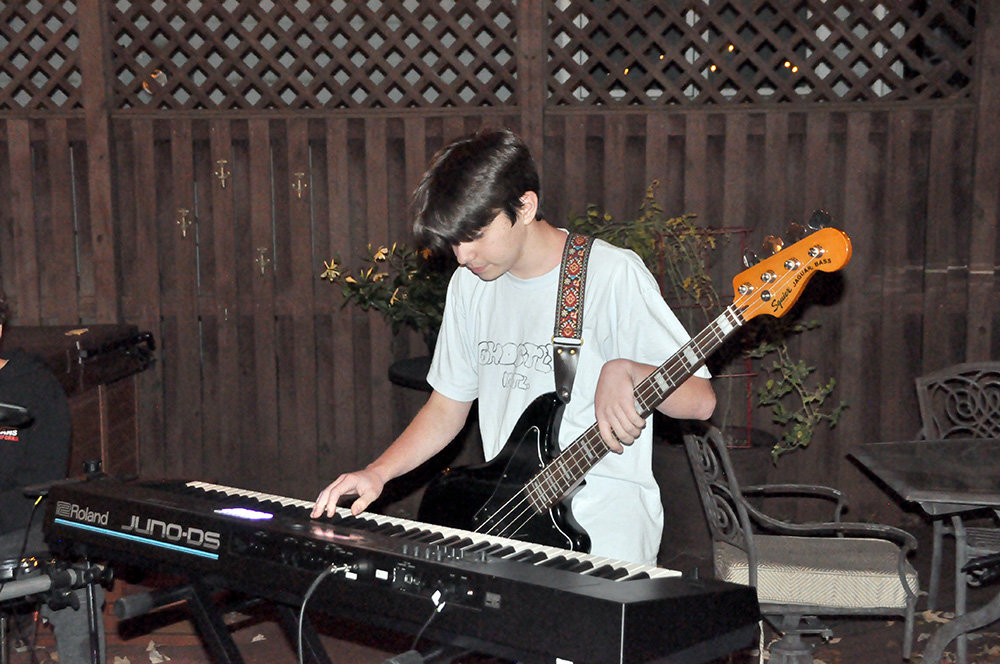 Keith Ivey, who doubles as Ivy League’s keyboardist and bassist, started playing piano in middle school and is proud of the band’s recently released debut album. “I didn’t really realize how cool of a project it was until we had all of our songs fully fleshed out,” Ivey said.
Photos by Mark Patton 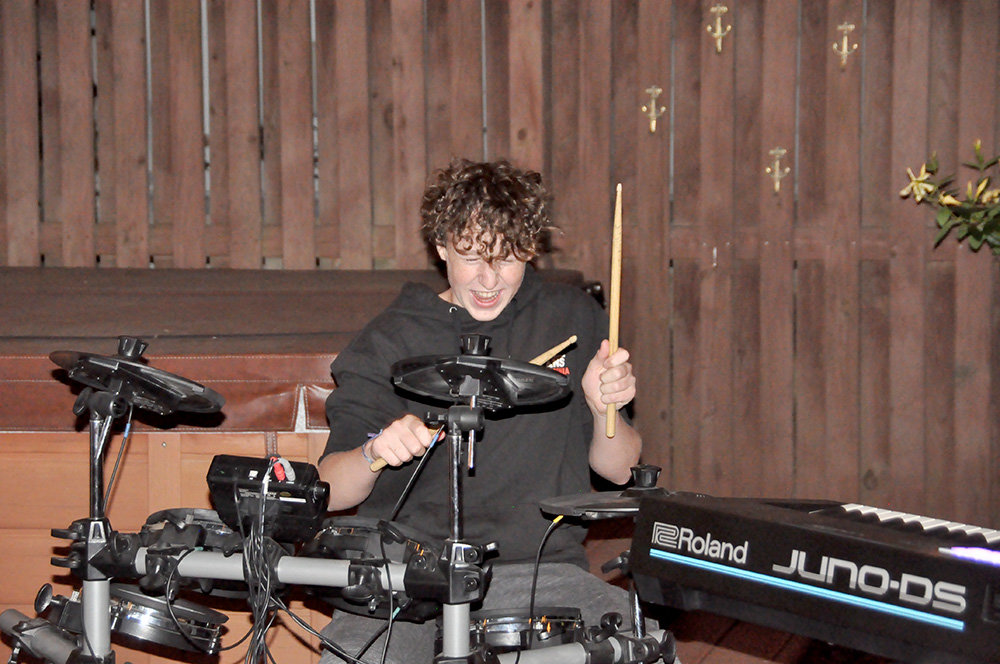 Cam Blackburn, Ivy League’s drummer, played during a private performance for the Severna Park Voice on October 11. “It’s very nice to have people my age in my band because I’ve been working with people either older than me or younger than me for a while,” Blackburn said about his band.
Photos by Mark Patton 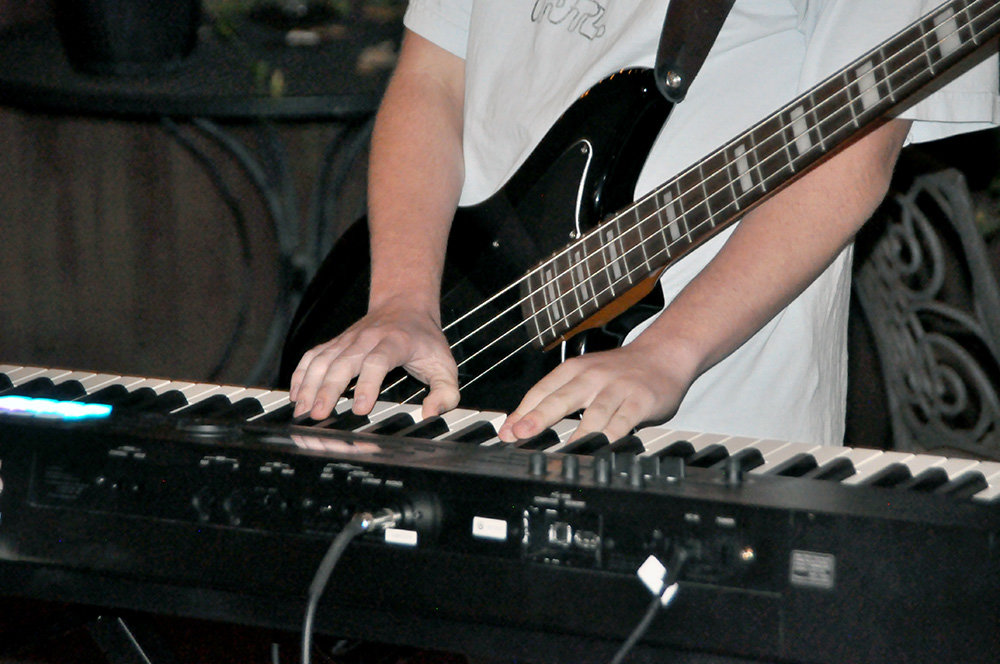 Ivy League is a band composed of drummer Cam Blackburn, keyboardist and bassist Keith Ivey, and lead singer and guitarist Nick Stohler. The group’s debut album, titled “Homecoming,” was released in October and celebrated with a party at Severna Park Taphouse.
Photos by Mark Patton
Previous Next
Posted Wednesday, November 2, 2022 10:36 am
By Mark Patton l mark@severnaparkvoice.com

A trio of Severna Park High School musicians are ensuring their freshmen year is one they’ll remember.

Ivy League is a band composed of drummer Cam Blackburn, keyboardist and bassist Keith Ivey, and lead singer and guitarist Nick Stohler. The group’s debut album, titled “Homecoming,” was released in October and celebrated with a party at Severna Park Taphouse.

“We didn’t really expect much; we were a band with little to no notoriety coming from a small town in Maryland,” Ivey said.

Judging by the reaction by audiences and fans, expectations have been exceeded.

In addition to the enthusiastic response from the roughly 200 people in attendance at the band’s album release party, Ivy League has already amassed more than 10,000 monthly listens to their debut on the streaming service Spotify.

“The exciting part is when you look at where they’re from,” said Blackburn, noting that about 2,000 streams of their songs are coming from Arizona and about 1,000 from Germany.

“Homecoming” is comprised of 10 original songs that showcase Ivy League’s wide range of influences from indie rock and Midwest emo to post-punk and grunge.

Stohler cited Queens of the Stone Age as inspiration for the album’s sonic diversity.

“They have a lot of different kind of songs,” Stohler said. “They’re not really like one thing, and that’s kind of the sound I was going for.”

Ivey said genre-bending Phil Elverum of The Microphones serves as one of his main musical idols, and Blackburn touted the virtues of The Beatles drummer Ringo Starr, whose influence is evident in the rhythm on some of Ivy League’s brighter songs, such as “Sunburn.”

Stohler, who has been playing the guitar since sixth grade and has been attempting to write songs since early in elementary school, gives some of the credit to his restlessness.

“I can’t ever sit still because I’m always thinking about stuff, so I come up with a lot of ideas,” Stohler said. “Most of the time it just happens when you’re playing around with your instrument and find something cool.”

The band got its start a couple of years ago when Stohler teamed up with rhythm guitarist Lane McCollom, a friend from Pennsylvania, to record a few songs over the internet. The mileage between them became a barrier once Stohler caught the itch to do live gigs, though, and the pair parted ways. McCollom is now considered an “unofficial member” of the band, and he joins Ivy League for performances when he’s able to, including the recent album release party.

Severna Park musician George Evans praised Ivy’s League’s potential while describing their indie vibe and catchy tunes. Putting out an album during their first year of high school is also something he noticed.

“Writing and releasing your own music is a big step most bands, especially starting out, don’t necessarily leap into,” Evans said. “Their band should be applauded for doing just that.”

Members of the trio are not limiting their musical talents to just Ivy League. Blackburn and Ivey are members of the school’s marching band, and all three band members are participating in Severna Park High School’s November production of “Footloose.” Despite their busy schedules, Ivy League still manages to practice once or twice a week and routinely do performances around town, including busking in Annapolis.

“I just like it when people like smile or dance or have a good time … that just makes me happy,” said Blackburn, who wears a perennial grin when he is behind his drum kit.

Ivy League’s ambitious drive may have helped to create a growing buzz about their talent, but they share a refreshing vision of what’s important to them about their craft.

“I just want to make music with my friends,” Ivey said.

“Homecoming” is available on music streaming services and can be purchased on iTunes.

Video by Mark patton
Ivy League, a band comprised of a trio of Severna Park High School freshmen, performed the song “Burning Drawings” during a performance for the Severna Park Voice on October 11. The song is one of 10 original tracks on the group's debut album, titled "Homecoming."