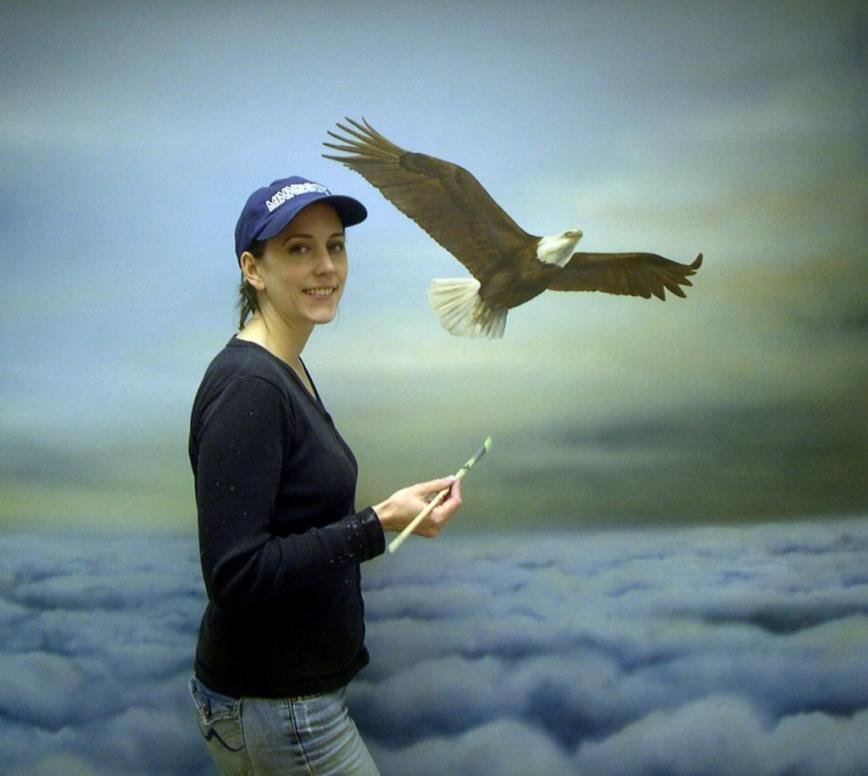 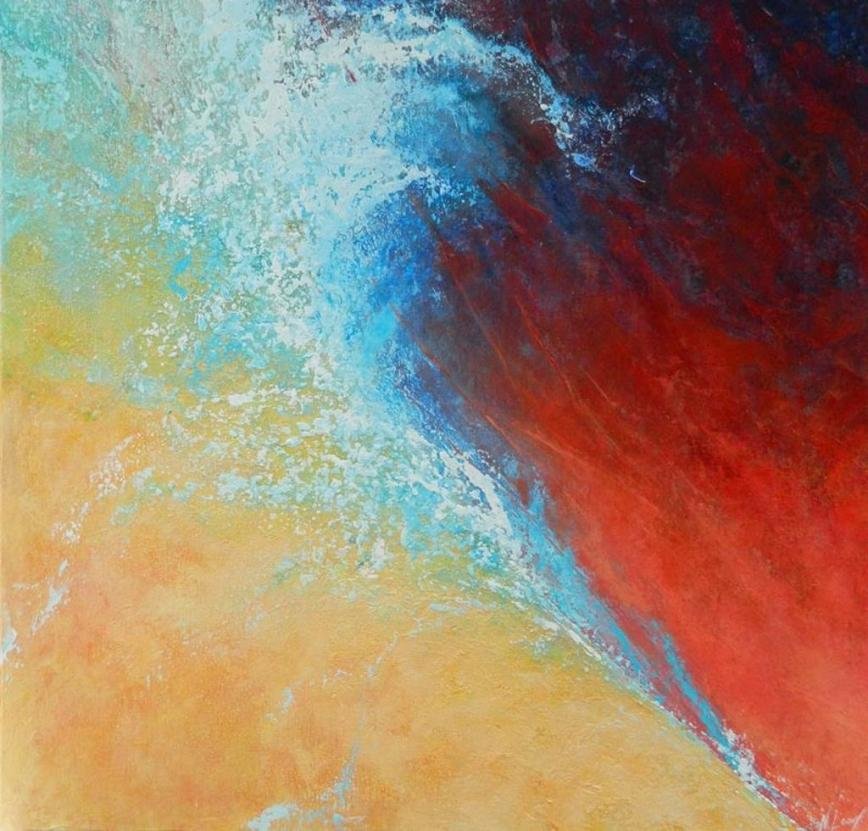 Leavy’s interpretation of the nautical flag for O, is featured in the “Colors of Summer” exhibit at West Annapolis Artworks & Fine Framing.
Previous Next
Posted Wednesday, June 17, 2015 11:02 pm
Zach Sparks
Living in a home that overlooks Stoney Creek, artist Nichole Leavy can find plenty of inspiration in nature. “We moved onto the water, into our dream house three years ago,” Leavy said. “Whenever I can, I work outside. I love watching kayakers.” But it’s the beauty she has found in people and their pets that has led them to become the subjects of many of her works.

Leavy is a multi-skilled artist who creates murals, portraits and nautical code paintings, which she called “a decorative take on nautical flags,” which are used for communication between boats at sea. But long before she started making abstract paintings of nautical flags, Leavy pursued a career in art therapy. She earned a degree from Maryland Institute College of Art (MICA) and attended George Washington University.

“MICA gave me the skills, the confidence and the ability to put myself out there,” Leavy noted. “At George Washington University, I looked at the psychology of art and what comes out subconsciously.”

Leavy started doing portraits of people and pets after being discouraged by a lack of job opportunities. Her murals have spanned the walls of bedrooms and St. Elizabeth School in Baltimore, where she painted an Eagle and words for the school’s five behavioral expectations: responsibility, respect, rethink, achievement and encouragement. Some of the designs she incorporated for homes include kids and adults playing basketball, and a dragon and rooster, which are symbols used in Chinese astrology.

The Pasadena resident enjoys painting people and pets, whether they are life-sized murals or portraits crafted with oils, but lately, she has been enthralled with nautical code paintings.

“When I do murals and portraits, it’s for someone else,” Leavy explained. “There is an emphasis on realism and it’s kind of constrained … With the nautical code paintings, hopefully they evoke the feeling you get from sailing, like sunlight through the water.

“I approach all nautical flag paintings as a process,” she added. “Through layers and palette life and glazes, I let the painting take a life of its own.”

Three current exhibits are displaying Leavy’s nautical code paintings. Two of her 8-by-8 pieces are part of the “Unique Petite Squares” show at Wimsey Cove Framing & Art in Edgewater that runs through June 30. Leavy’s pieces are called “Romeo” and “Juliet,” representing the nautical code letters R and J.

“These are a little different, because they are realistic paintings of sailboats but closely cropped,” she said. “So they may not be immediately recognized as sails, or as nautical code, but it's both.”

Her depiction of the letter I, titled “Turning to Port,” is part of Hospice of the Chesapeake’s Gallery 90 show “Light and Shadow,” which runs through July 15.

She also has two works featured in the “Colors of Summer” exhibit at West Annapolis Artworks & Fine Framing. Those pieces are "Nautical Flag O" and "Nautical Flag W." The Gallery 90 exhibit runs through August 24.

In her spare time, Leavy volunteers with nonprofits. She previously taught at Chesapeake Arts Center, and she currently assists youth at Art with a Heart in Baltimore. To sample some of Leavy’s work, visit www.nicholeleavy.weebly.com, or visit Twisted Sisters in Annapolis to find pieces for sale.

Her recent fascination with nautical paintings aside, she aspires to keep working in several media. “I can’t seem to let go of doing murals,” Leavy said. “I hope to keep doing everything. When you’re painting someone else’s space, that’s a nice way to become involved with people.”