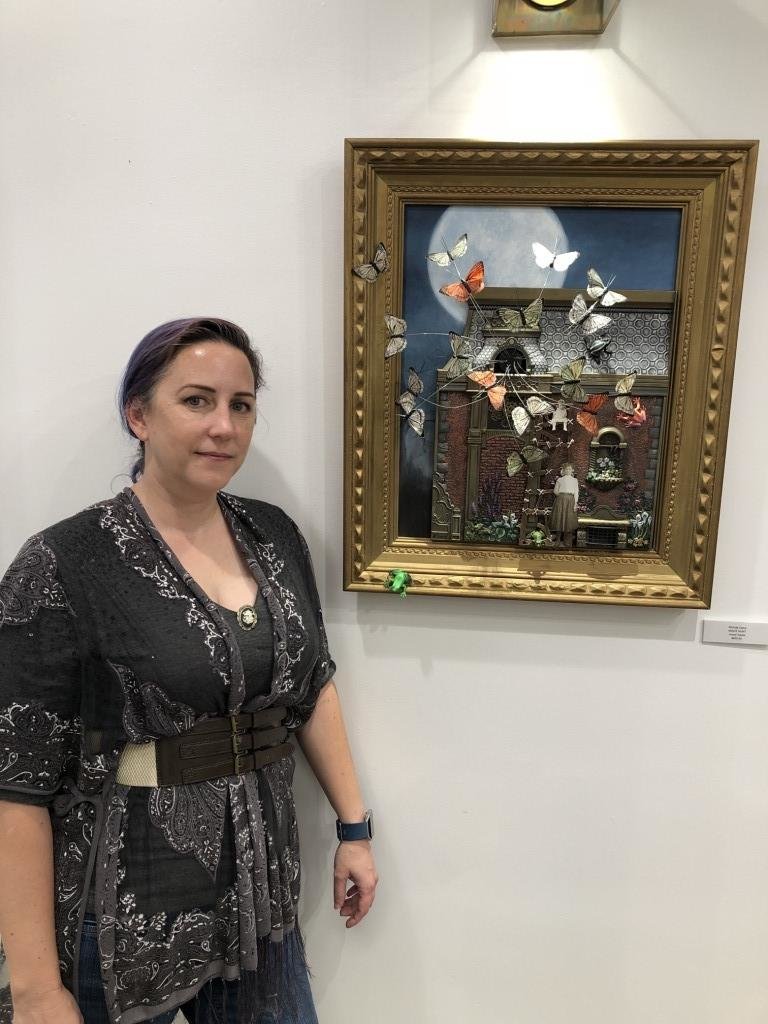 As an assemblage artist, Nichole Leavy makes art with everyday objects and hidden gems she unearths when thrift shopping.
Photo by Judy Tacyn 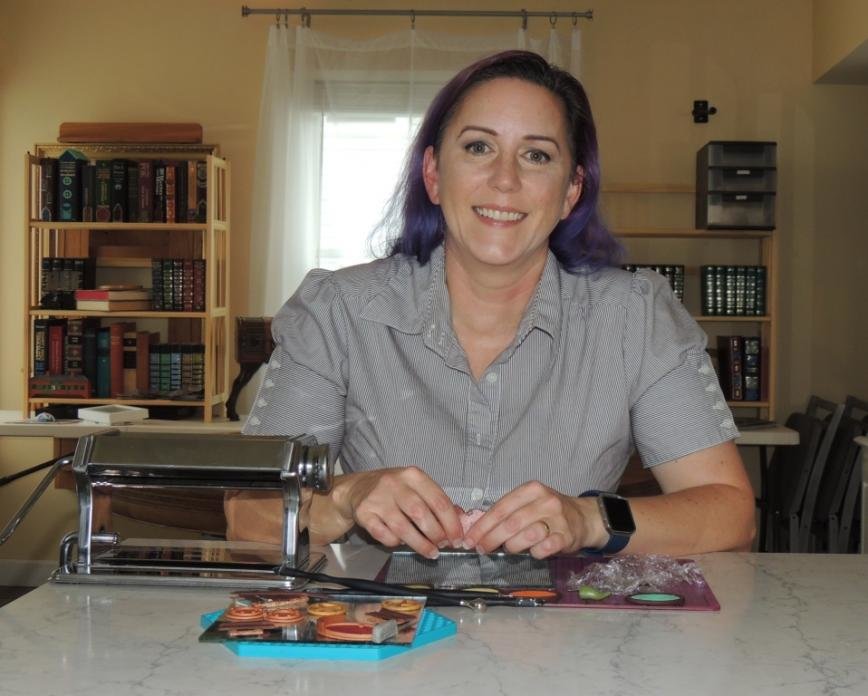 Nichole Leavy creates one-of-a-kind works of art that beg the viewer to look beyond the individual elements to discover a larger story in the assembled piece.
Photo by Judy Tacyn 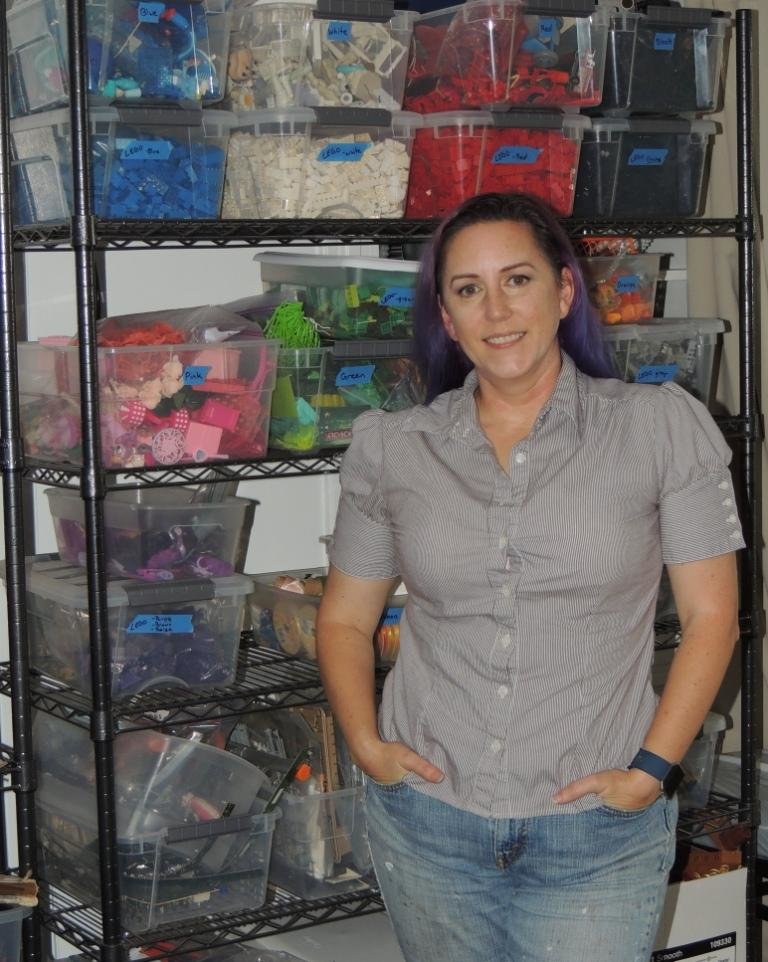 Nichole Leavy creates one-of-a-kind works of art that beg the viewer to look beyond the individual elements to discover a larger story in the assembled piece.
Photo by Judy Tacyn
Previous Next
Posted Tuesday, September 18, 2018 1:22 pm
Judy Tacyn

Nichole Leavy is somewhat of a contradiction. As an assemblage artist, she uses tools that are everyday objects and hidden gems she unearths when thrift shopping. The more objects she can surround herself with, the more options she has, and the more eclectic and expressive her art becomes. Yet in the randomness of objects she collects, she craves organization.

Her workspace is pristine. Her found objects are stored in uniform plastic bins, sorted by color, or if she has a particular project in mind, by name, such as Faerie Book-Apartments or Teacup Pools. Her assemblage pieces represent the marriage of order and randomness to create one-of-a-kind works of art that beg the viewer to look beyond the individual elements to discover a larger story in the assembled piece.

Like an expressive poem or literary passage that needs to be reread to be further understood, or a classic movie that reveals itself anew every time it’s viewed, assemblage art can speak volumes simply by the choices the artist made when pulling together each unique object to collage.

Leavy’s path to assemblage art is only part of her love of all things creative. “I knew I wanted to have a career in art while I was in high school, so I took a lot of art classes once my required courses were done, and received a couple of scholarships,” said Leavy. “I earned a Bachelor of Fine Arts degree from Maryland Institute College of Art, where I majored in general fine arts so I could take a lot of different kinds of fine arts classes without having to concentrate on one (such as painting, drawing, sculpture, and photography).”

That diversity has helped form Leavy’s art career evolution. For about 10 years, she painted murals and detailed, realistic portraits on commission. In 2015, she started working in abstract expressionist paintings and, from there, rediscovered her passion of assemblage art she formed when in college.

“I started exhibiting these paintings and sculptures in a few galleries in Baltimore and Annapolis, and in the span of a year, the sculptures just took over,” explained Leavy. “I’m kind of obsessed with the process of it, and I’m having a great time.”

Because assemblage art requires mixed media, new and vintage, one has to wonder what comes first, the “stuff” or the vision.

“For the collaged animals, I decide I’m going to make a seahorse, so I just start rooting through my bins to find bits to fit the shape, then lay it all out before I start gluing things together,” Leavy continued. “A lot of pieces come together when I’m just looking through my supplies, and just start experimenting, placing interesting objects together. Then something sparks an idea, and I’m off!”

One of Leavy’s signature projects are her Faerie Apartments, made from books. Leavy will hollow out a book so that she can light them from inside, and the rooms are visible. Other times, she adds architecture to the outside so the books are still readable.

“I’m kind of obsessed with these,” said Leavy of the Faerie Apartments. “I’ve started making little teacup ‘ponds’ to go with them. I collect pretty teacups and saucers, and sculpt little creatures to ‘swim’ in them.”

In the perfectly organized chaos of her workspace, it’s hard to tell that Leavy has multiple projects working at once.

“Partly because of my short attention span, but sometimes it’s because I don’t have a part that I need,” she added. “That can be frustrating. But that’s what happens when you’re dependent on what you can find from discarded stuff.”

Leavy explained that people sometimes donate their old toys and books to her, but she mostly finds things at a recycling center that processes charity donations that were rejected for one reason or another.

“It’s like a cross between thrift shopping and dumpster diving,” she said. “But I do enjoy the hunt, and that little self-satisfied feeling of finding a treasure that no one else sees the value of.”

Leavy has advice for artists struggling to find their “style.”

“Don’t waste time trying to make the kind of artwork you think other people want,” she explained. “Do the art that you feel compelled to make. You’ll have more fun, and you’ll want to make more of it, which is the second piece of advice: make lots and lots of art. It’s the best way to get the bad ideas out of your system and to improve your skills.”

Leavy’s art is on display at Local by Design in the Westfield Annapolis mall and at the downtown location on Main Street Annapolis; Gallery 564 in Severna Park; online at www.etsy.com/shop/nichole leavy and www.nicholeleavy.com. She teaches a monthly workshop at Gallery 564, and abstract painting at Anne Arundel Community College.

Tides and Tunes: The Grilled …

Benedict Arnold is the most famous …